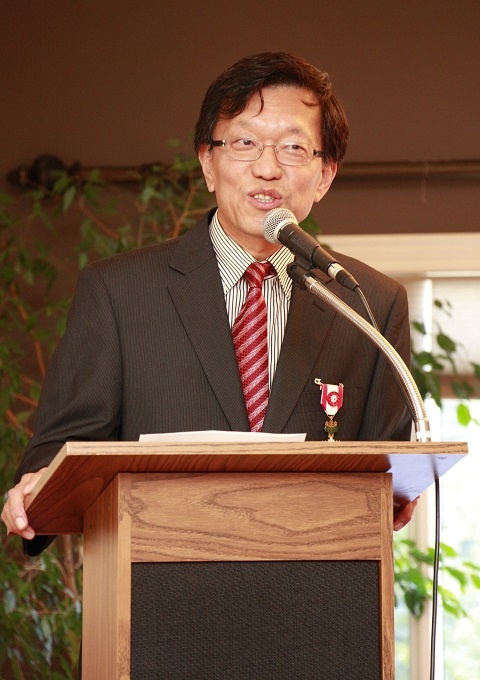 On July 6th, 2016, Professor X. Jie Yang received The Order of the Rising Sun, Gold Rays with Rosette at an Award Ceremony & Reception held by Consul-General Kunihiko Tanabe, on account of Dr. Yang’s tremendous endeavours toward the promotion of Japanese language education and the pursuit of Japanese studies. Among Dr. Yang’s many long-term contributions to Japanese language education, highly notable is his 2005 initial establishment and subsequent popularization of the Japanese Program in the Department of Linguistics, Languages and Cultures at the University of Calgary. Among the approximately 50 guests in attendance at the ceremony was President of the University of Calgary, Dr. Elizabeth Cannon, as well as members of the press, many associates in the field of Japanese language education, several advocates of Japanese culture, and friends and family of Dr. Yang. In his remarks, Consul-General Tanabe praised Dr. Yang’s achievements as beneficial to furthering the mutual understanding between Japan and Canada. In response to his being honoured by the government of Japan with such a distinction, Dr. Yang expressed his sincere gratitude to the University of Calgary for accepting him with open arms, as well as conveying that while some recipients of such a grand honour in recognition of a lifetime of achievement might consider it a marker of the conclusion of their careers, he felt that it was more of a halfway marker for him, and eagerly plans to continue on in his journey of Japanese language and culture education. In her remarks, Dr. Cannon, President and Vice Chancellor of the University of Calgary, mentioned that it was impressive that Dr. Yang was receiving this distinction at such a relatively young age, and expressed her thanks for his 25 years at the University so far, and looked forward to Dr. Yang – an ideal faculty member and true scholar with infectious excitement – being with them for yet another 25 years. 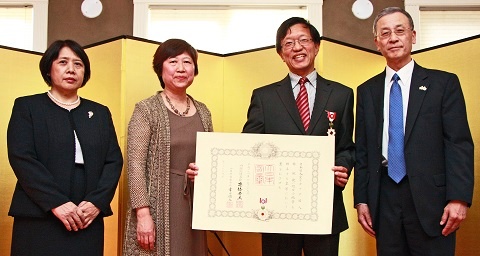